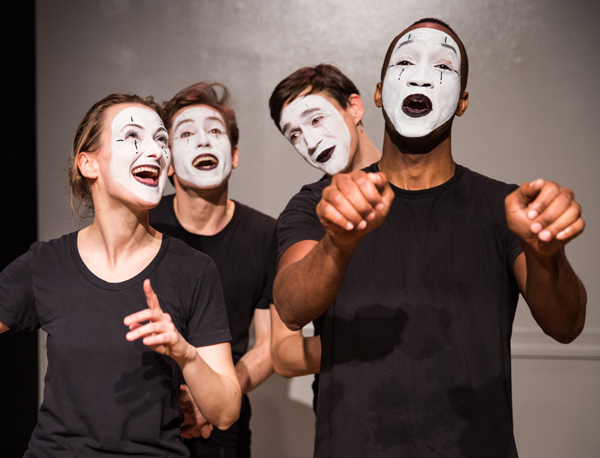 The company members of Broken Box Mime Theater (BKBX) want to set something straight. No, there will not be any mimes attempting to escape from invisible boxes at their performance at Wolf Trap’s Children’s Theatre-in-the-Woods on Tuesday, Aug. 2. In fact, the company members of Broken Box want audience members to suspend any misconceptions they might have about mime, and prepare themselves for a different type of physical theater─one that delivers a theatrical experience without sound─a world that is only limited by the power of one’s imagination.

“I think the stereotype is that a mime is a street performer pretending to be trapped in a box,” says performer Kristin McCarthy Parker. “But, like most theater, mime is expressive and cathartic storytelling that enlists the audience’s imagination in telling it.”

“What BKBX does isn’t anything like those old stereotypes,” agrees fellow performer Marissa Molnar. “We draw from contemporary storytelling styles, like movies, TV, comics, books, and animation, and we use both comedy and drama to delve into complex social issues.”

The wonderful thing about mime, Broken Box company members Molnar, Parker, and Julia Cavagna will tell you, is that there are no set rules─and that’s what makes it exciting. Molnar, Parker, and Cavagna elaborate on their art below (answers are abridged). To see Broken Box Mime Theater perform at Children’s Theatre-in-the-Woods purchase tickets here.

First off, how does one become a mime?

MOLNAR: Lots of technique training, storytelling practice, and performance experience. Like acting, there are many styles of mime and ways to learn them! Creating our work requires a detailed eye for storytelling, a certain amount of physical strength and agility, and an open and collaborative spirit.

PARKER: BKBX’s company members come from different backgrounds and performance techniques─there’s no one way! All of us have an interest in physical storytelling and communicating an idea without words. Some of us found that through mime and clown training, others through dance and physical comedy.

What drew you to this particular type of physical theater?

MOLNAR: I saw Synetic [Theater]’s wordless Hamlet, and I was blown away! I had always been told I can’t dance (which, in certain styles, is still true), but I found that I really enjoyed storytelling with my body. My first favorite aspect of physical theater and mime is that you can convey deeply universal human experiences to anyone, regardless of what language they speak. My second favorite part of performing mime is that you can get the audience to imagine anything─not only faraway settings or complex relationships, but also metaphors and impossible or absurd situations. It’s a beautifully accessible art form.

PARKER: I have a background in clown and love the sincerity, inventiveness, and vulnerability of that style of performance. Mime is very similar—you have to “essentialize” the storytelling and rely solely on body language to tell it. Performing in this style is a blend of technique and spontaneity: being very specific with your gestures and movement, but also having an honest emotional experience with the audience in the room that day.

How do you portray emotions without making any sound?

MOLNAR: Much of the work we do centers around observing body language and [breaking it down so that] we communicate a feeling or a story beat using the fewest number of expressions or gestures possible. We break down the mechanics of expression with the face (Where are your eyes looking? What are your eyebrows doing? Your mouth?) and the positioning of the body (Is the head tilted? Leaning forward? Away?) and [we] find a truthful way to communicate the element needed for the story.

CAVAGNA: A slight change in our face, a modification in your vertebrae, can change the whole message of what we want to express. Words or (even sounds) sometimes just highlight what has been said with our bodies and the quality of our breathing. All of that can convey different emotions without making a single sound.

What do you hope families take away from your performance?

MOLNAR: I hope they laugh, maybe cry a little, and see themselves and the world around them! I hope they feel inspired about what human bodies can do! And I hope we expand their ideas about what theater can be.

CAVAGNA: We hope they can relate to a group of mimes telling stories outside of a screen. That imagination can be a powerful thing. That interaction is something that we need to bring back to our lives. To learn more about Broken Box Mime Theater visit: https://www.brokenboxmime.com/.

The Man Behind The Music: A.R. Rahman