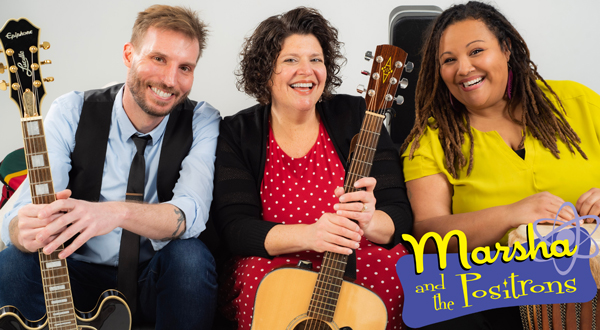 If it’s true that you should write what you know, then Marsha and the Positrons know A LOT about science. But they also have a knack for turning what could be staid lessons about science into fun, catchy tunes that both children and their parents can enjoy together—and if they learn something while they’re at it, then Marsha and the Positrons have accomplished something really special. Led by Wolf Trap Teaching Artist Marsha Goodman-Wood, who is also a trained cognitive neuroscientist, Marsha and the Positrons is a kindie (kids + indie rock) band who loves teaching children how the world works through fun and clever songs about science. The band also features musicians David Durst, David Strauss, Ayanna Gallant, and Jon Guo.

Following Goodman-Wood’s solo effort Gravity Vacation (2012), the group released their first full-band album in 2018, Positronic. Ahead of their performance at Wolf Trap’s Children’s Theatre-in-the-Woods on Tuesday, June 28, we sat down with Goodman-Wood to talk about how she brought together her love of science, music, and children.

The following Q&A has been edited for length.

Wolf Trap (WT): Can you talk a little about your background? How did your former career as a cognitive neuroscientist influence your work today, and what inspired you to turn to music as a vehicle to teach children about scientific ideas?

Marsha Goodman-Wood (MGW): I’ve been singing ever since I can remember, have played several instruments over the years, and I’ve also acted and done musical theater since I was a kid. So, music has been there alongside science my whole life.

When I became a mom, I started writing songs for my own kids and students based on conversations and questions they would have. Those answers sometimes came out as songs about science! I love all kinds of science, so if I don’t know an answer, I’ll look it up and try to include some of the facts I learn in a song—but I always try to keep it fun! I’m excited to have a new song called “Counting on My Brain” on our upcoming record, so that one really connects with my neuroscience background!

MGW: I love that science is all about wonder and exploration, and there’s always something new to learn. Asking the right questions and collecting evidence to get to the solution is such an important idea in science and beyond. When you apply that approach to learning about the world, it opens the door to understanding.

WT: What do you like about writing music for children? What do you hope they take away from your music?

MGW: I think kids are capable of understanding anything as long as it’s explained clearly. If I can answer a question with a song, make you want to dance or groove along, and pass on a positive message about life and our humanity, that’s a good song!

WT: Who are your personal artistic inspirations?

MGW: As a singer, I love jazz singers—Ella Fitzgerald, Sarah Vaughn, and Dinah Washington are at the top of the list. I’m also influenced by R&B and Motown greats like Aretha Franklin, The Supremes, Gladys Knight, and Martha Reeves. I’m also an indie rock fan and some of my favorites include They Might Be Giants, Mary Lou Lord, The Pixies, Yo La Tengo, and We Are Scientists. And I love the Beastie Boys. I also grew up listening to pop and Top 40 radio, so all of that music influences my music and songwriting.

For more about Marsha and the Positrons, visit marshaandthepositrons.com. See them live at Children’s Theatre-in-the-Woods this summer on June 28. Tickets are available here.