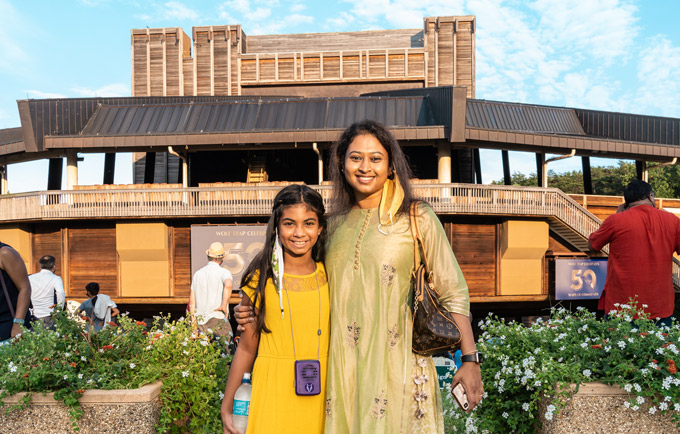 Mother’s Day is just around the corner, bringing a great opportunity to honor the wonderful mothers and women in your life. Whether your loved ones prefer upbeat throwbacks or contemplative ballads, Wolf Trap’s summer season has the perfect concert for you. So pack your picnic baskets and get ready for a memorable evening of music and community!

Kool & the Gang stands the test of time as one of the greatest funk and soul bands in history; their monster hit “Celebration” remains a ubiquitous melody across all ages even today, over four decades after its release. The prolific band returns to Wolf Trap for a reprise of their greatest hits including “Jungle Boogie” and “Cherish,” supported by Morris Day & the Time of Purple Rain fame. Swing by the Filene Center on Friday, June 3 for a “Ladies’ Night” you’ll never forget!

ABBA is behind some of the most infectious hits in pop music, from “Dancing Queen” to “Mamma Mia.” Catch the music of this Swedish supergroup come to life in ABBA The Concert, featuring the top ABBA tribute group in the world. Come to the Filene Center on Sunday, August 7 for a dazzling performance of ABBA’s most iconic hits.

FOR THE WOMEN WHO LOVE TIMELESS BOPS

Beautiful: The Carole King Musical breathes new life into the tunes you loved back in the day, from “(You Make Me Feel Like) A Natural Woman” to “Happy Days Are Here Again.” The Tony and Grammy Award-winning musical tells the story of the early life and career of Carole King, and her remarkable rise to stardom. Settle down at the Filene Center on Tuesday, June 21 and Wednesday, June 22 for the songs you know you love, and the story you’ll never forget.

FOR THE LEADING LADIES WHO LOVE THE STAGE

In Sing-A-Long Sound of Music, every woman gets to be the leading lady. Come dressed in your finest von Trapp glory for a pre-show costume contest before jumping into the iconic film, complete with on-screen lyrics to sing along to your heart’s content. Enjoy this classic Julie Andrews film at the Filene Center on Saturday, July 16.

If you’re looking for a Broadway serenade, Signature Theatre and Wolf Trap’s Broadway In The Park is just the ticket, this year featuring two incredible women of stage and screen: Kelli O’Hara and Adrienne Warren. Come to the Filene Center on Friday, June 24 for an evening of musical theatre hits.

FOR THE WOMEN WHO WANT A GIRLS’ NIGHT OUT

The decade of the ‘90s was a singular era in music history, ushering in the time of the boy band. Many ladies of the ‘90s will agree: the smooth voices and heart-rending lyrics of Boyz II Men became the soundtrack to some of the most emotional and formative moments of their youth. Gather your girlfriends for a throwback night unlike any other at the Filene Center on September 16 for Boyz II Men’s Wolf Trap debut, also featuring the crisp harmonies of SWV.

FOR A FAMILY-FRIENDLY ADVENTURE

Walt Disney Animation Studios’ Academy Award®-winning film comes to life in Encanto: The Sing Along Film Concert, featuring an on-stage band celebrating all the record-breaking hit songs from the beloved soundtrack. Catch this one-of-a-kind concert event at the Filene Center on Thursday, August 11.

For a performance that promises to be equal parts energetic and educational, catch Marsha and the Positrons at Children’s Theatre-in-the-Woods on Tuesday, June 28. Their catchy tunes and clever lyrics will inspire curiosity in children (and parents!) about how the world works.

FOR A PERFECT GIRLS’ OUTING ON THE LAWN

Sometimes the perfect evening is pretty simple: it involves some good food, good company, and good music. Mary Chapin Carpenter and Emmylou Harris at Wolf Trap promises to be just that experience. Bring your best girlfriends for a night of being serenaded by the melodic voices and moving lyrics of Americana stalwarts Mary Chapin Carpenter and Emmylou Harris at the Filene Center on Saturday, August 27.

The powerful harmonies of country crossover group Little Big Town will be sure to awe you. Hailing from Homewood, Alabama, Little Big Town has been producing their rousing, crowd-pleasing numbers for over two decades. Catch them at the Filene Center on Thursday, August 4.

FOR THE WOMEN AND GIRLS WHO LOVE A CLASSICAL SPECTACLE

Wolf Trap is known for its classical offerings just as much as its contemporary, and this year, there’s an especially unique performance in the works with the Washington Chorus. Joyfully Together: A Community-Powered Singing Celebration celebrates the power of singing to strengthen community, provide inspiration, and promote healing, with an astounding 8,000 singers of different ages and musical backgrounds performing various styles and genres in the Filene Center on September 18.

An Evening with The Washington Ballet celebrates the beloved work of composer George Balanchine—namely the iconic Tchaikovsky Pas de Deux—and features a trio of original works by Silas Farley and The Washington Ballet’s own Andile Ndlovu. Catch this spectacular performance with Wolf Trap Orchestra at the Filene Center on Wednesday, 14 September.