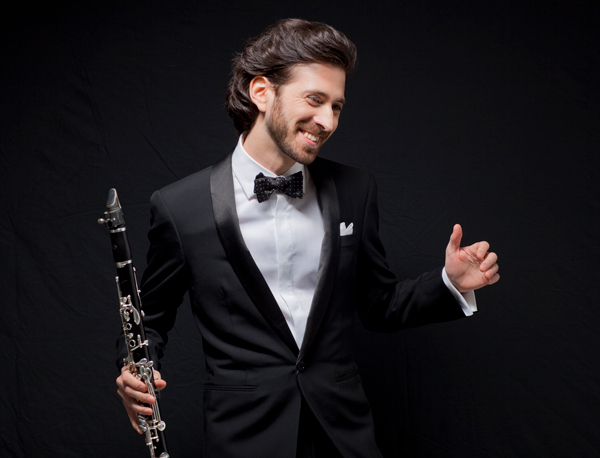 From a young age, award-winning jazz musician Oran Etkin formed a deep love for music of all disciplines. As a professional musician, he has traveled the world, learning the music “language” of different cultures, and is dedicated to passing those rich musical traditions on to the next generation.

This season, Oran Etkin will perform on the Filene Center stage as part of its 2021 Children’s Performance season at Wolf Trap. In his show Finding Friends Far From Home, Etkin and his friend and clarinet, Clara Net, will travel the world to make new instrument friends. Evoking a tale of friendship and understanding, instruments will speak to each other through music and open a window for audiences to soulfully and respectfully experience other cultures.

Learn more about the inspiration for Etkin’s music below. To purchase tickets to Oran Etkin: Timbalooloo, visit wolftrap.org/calendar.

The following Q&A has been edited for length.

Q:        Can you talk about your background and how you first became interested in performing?

A:         I have been playing music most of my life─starting with piano at age four, violin at eight [years old], saxophone at nine, guitar at 10, clarinet at 13… but I truly fell in love with music when I was nine years old and heard a recording of Louis Armstrong. For the next five years, I listened to all the Louis Armstrong recordings I could get my hands on.

Q:        Why did you decide to focus specifically on children’s music?

A:         I grew up with the understanding that to be a musician includes a responsibility to bring the next generation into the music. My goal with Timbalooloo is to open a door through which children can enter the world of music and culture.

In Timbalooloo, all of the instruments come to life as characters and speak through their music… but the truth is that is actually how I think of music even when I play at a jazz club! I don’t think “I’m going to play a B-flat now,” I think about my clarinet talking and interacting with the other instruments─sometimes teasing them, sometimes crying with them or being playful with them.

I believe that music is a language and children have an amazing ability to learn it in a deeply intuitive way, just like they learn their mother tongue.

Q:        What do you hope the audience takes away from your performance?

A:         This shift in how we conceive of music as instruments talking can open up a whole new way of listening to instrumental music and also inspire children to express themselves.

Through this story of Finding Friends Far From Home, I want them to see the beauty in the music of other cultures and see how we can connect with one another in a positive and creative way across geographic, cultural and generational boundaries.

Q:        Who or what are your personal musical/artistic inspirations?

A:         Louis Armstrong is the reason I fell in love with music at the age of nine. He made his trumpet truly come alive and speak like a human voice. There is no way to notate his music and expect someone to play it.  This is at the core of how I conceive of music and how I created Timbalooloo to shape the way that children conceive of music.

Since then, many other artists have inspired me. Over the past few years I have been touring the world and collaborating with great artists in Africa, Asia, Europe, and South America—folks like Musekiwa Chingodza or the Chigamba family in Zimbabwe, Danilo Caymmi or Benjamim Taubkin in Brazil, Erkan Ogur, and Jehan Barbur in Turkey.

I was lucky to study with the great Yusef Lateef, one of the elder statesmen of this music called jazz, who would have turned 100 years old last year. He was one of the first American musicians to incorporate sounds from Africa and Asia into his music in a very deep and respectful way. His global approach, combined with his firm roots in the swing and blues richness of Black American Music has been a great inspiration to me. For more information about Oran Etkin and his music, visit oranetkin.com and timbalooloo.com.

Summer Crafts and DIY Projects with an Arts Focus