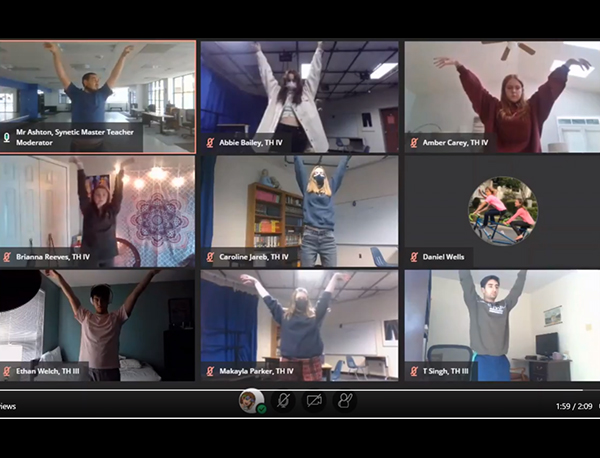 Think back to high school and the pressure you experienced as a student. Today, students are expected to excel in academics, sports, and the arts, while serving in leadership positions and staying active in their communities and extracurricular organizations—all while looking Instagram-perfect. The pressure of expectations from their peers, their parents, and society in general can be daunting. And for many, the luxury of “failing” does not seem like it is an option—but what if it was? What if we could learn to embrace our failures, and even grow from them? Wouldn’t that make us stronger in the end?

It was this idea that inspired Fairfax County Public School teacher and first-year Centreville High School theater teacher, Christie Blewett, to develop Failure Is an Option, a process-based arts project exploring the concept of failure. What does failure look like, and what can it teach us? Working with Chris Rushing, Education Director for the Arlington, VA-based theater company Synetic Theater, the two came up with a proposal for the project, and submitted it to Wolf Trap’s Grants for High School Performing Arts Teachers program.

“Each year, Wolf Trap’s High School Grants program acknowledges high quality instruction and performance achievements of public high school music, dance, and theater teachers,” said Amy Russell, Manager Children’s Theatre-in-the-Woods and High School Grants Program. “In a year that had so many challenges, it was essential for us to acknowledge the important role that social-emotional learning plays in the performance process, and in students’ lives. Christie Blewett’s project spoke to us in that way, and it’s gratifying to see how it came together.”

Once the grant was approved, Blewett and Rushing began fleshing out the project. How could they get students—who were so conditioned to be afraid of failure—onboard with accepting that failure, in this case, was okay, and even necessary?

“During our initial conversation, [Christie] was talking about how she wanted to elevate the students’ work and help institute a culture change,” says Rushing. “Teenagers can struggle with the idea [of] failure. There is shame wrapped around it, that has I think, been amplified by social media. Yet, we need to fail before we can be good at something.”

Far from a setback, Rushing even postulates that the act of failing is, in fact, a vital part of the performance process.

“As performers, so many compelling choices and personal growth occur out of failure,” he says, “so the goal of this residency was to try and create the mindset that failure wasn’t a bad thing, but a necessary part of growing.”

Failure Is an Option was spread across several class periods with students participating both virtually and in person. Synetic’s Master Teacher, Ashton Schaffer, and Technical Master Teacher, Raymond Simeon, worked with students through a performance-based acting class and open-dialogue seminar, which helped students develop and build on their ideas. True to Synetic’s roots, an emphasis was placed on how students could bring their ideas across physically, by means of a performance piece.

“[The students] felt empowered to purposefully face and share their moments of feeling failure and success,” says Blewett. “Once one brave student shared, the rest followed. The safe space they created together was only further nurtured by the Synetic Teaching Artists, and it flourished.”

Students used the ideas presented by the Synetic Master Teachers to further explore concepts through exercises in which they redefined what failure meant to them, and established what personal success looked like. A compilation of their performances can be found here.

What, ultimately, did Blewett and her students take away from the project?

“We’ve become well acquainted with trying and failing over the course of this year, and it was relieving to have this opportunity to process that failure,” shared one student.

Says Blewett, “As a theater program, we have come to the conclusion that failure is the only option if you want to produce rich growth and novel experiences. We are believers that failure is not the opposite of success—it’s a vital part of success!”

“It isn’t a failure, even when you don’t succeed, if you pour your whole heart into it,” he says. “Failure is lacking the courage and conviction to commit. Failure is letting fear and insecurity win. Failure isn’t not meeting a goal the first time you try. You get up and try again.”

For young people struggling with social, familial, economic, or academic pressures, Blewett acknowledges that it can be easy to get lost in the shuffle, but she has some advice.