Dancing with the (Wolf Trap) Stars 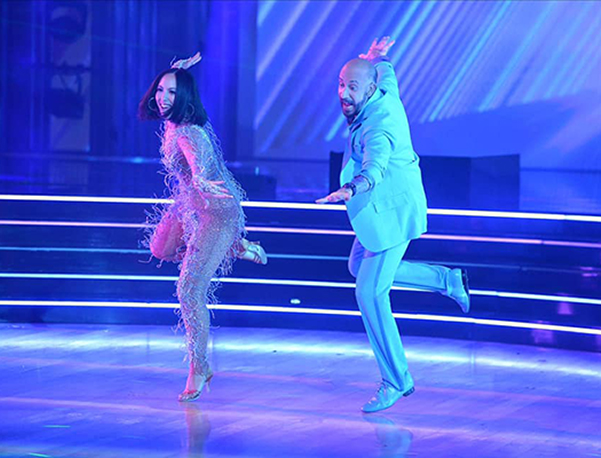 For 15 years, Dancing with the Stars (DWTS) has reignited a love of dance and brought ballroom style choreography to living rooms across the country. From the sexy samba to the passionate paso doble, the reality show has allowed audiences to journey with superstars as they learn about the dedication, passion, and precision necessary to become a professional dancer. In celebration of the reality television program’s Season 29 finale, join us as we mambo down memory lane and relive some of our favorite performances by Wolf Trap stars!

Season 29 brought a “Larger Than Life” performer with the Backstreet Boys’ AJ McLean and his partner Cheryl Burke. He came to Wolf Trap most recently in 2010 alongside bandmates Nick Carter, Howie Dorough, and Brian Littrell. While the boy bander’s time on this season ended after a viennese waltz to Queen’s “Somebody To Love,” his memorable cha cha alongside the rest of his band (including Season 21runner-up Carter) will surely go down as one of the most entertaining performances in the show’s history!

It’s no surprise Jennifer Grey, partnered with six-time winner Derek Hough, had the time of her life and took home the Mirror Ball trophy on Season 11. After all, the actress and dancer brought the iconic Frances “Baby” Houseman to life in 1987’s Dirty Dancing, which came to the Wolf Trap Drive-In this summer, alongside other musical themed movies. Watch Grey’s fiery Argentine Tango.

Wolf Trap Summer 2018 performer and 10-time Grammy Award-winner Chaka Khan brought her “I’m Every Woman” style to the ballroom alongside partner Keo Motsepe on Season 21. Watch her memorable Week 1 entrance to Khan’s very own “I Feel for You.”

Normani Kordei, who came to Wolf Trap in 2017 with Fifth Harmony’s Ally Brooke, Dinah Jane, and Lauren Jauregui, showed the world she was “Worth It” on Season 24 alongside partner Val Chmerkovskiy. Placing third overall, Kordei made Harmonizers around the country scream “That’s My Girl” with her peppy dances and refreshing song choices. Watch the pop star’s sexy foxtrot to “Big Spender” by Shirley Bassey.

Summer 2016 performer Drew Lachey, who came to Wolf Trap alongside his 98 Degrees bandmates Nick Lachey, Jeff Timmons, and Justin Jeffre, won the Mirror Ball trophy on Season 2 and was invited back for DWTS All-Stars. His brother Nick, and sister-in-law Vanessa Lachey, also competed on the reality show. Watch Lachey’s freestyle performance, alongside partner Cheryl Burke, to “Save a Horse (Ride a Cowboy)” by Big & Rich.

Legendary Wolf Trap performer Patti LaBelle got her groove on during Season 20 alongside partner Artem Chigvintsev. Competing for over half the season, the Godmother of Soul brought her signature style, grace, and stage presence to every ballroom performance. Watch the diva’s swanky and exhilarating dance to “Dan Swit Me” on jazz night.

While Wolf Trap Summer 2018 performer Gavin DeGraw competed on Season 9 alongside partner Karina Smirnoff, he’s famously told the world “life is sweeter off the dance floor.” The soulful singer has continued his relationship with the show by lending his voice to multiple performances throughout the series. Watch a perfect 10 performance by the DWTS pros as DeGraw sets the mood with “She Sets the City on Fire.”

Congratulations to all the contestants and dancing pros on another great season of Dancing with the Stars!