Behind the Scenes at Park Pop-Ups 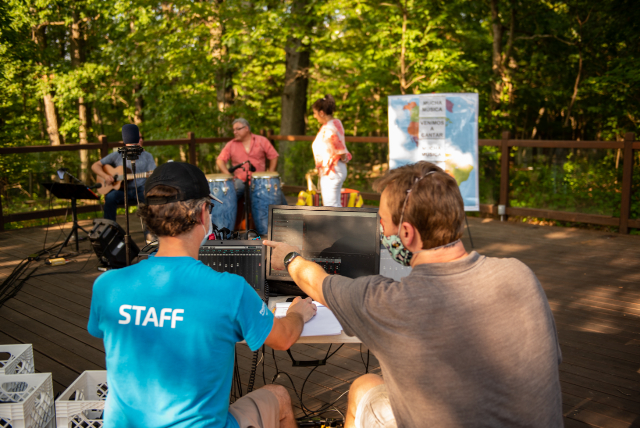 With the changes that occurred to Wolf Trap’s 2020 summer season, a massive collaborative effort took place to recreate Wolf Trap’s signature summer highlight—live performances in the Park—in a new way that was safe for performers and audience members alike. Thus, Park Pop-Ups were conceived!

Staff across multiple departments came together to form the group responsible for filming, recording, and producing these mini-concerts. Hear from the recording crew about their behind-the-scenes filming experience.

You had to create a film production crew from essentially nothing. How’d that happen?

Fortunately, Wolf Trap has a staff of very talented, hardworking people who have come to us from a variety of paths over the years; many having talents that are outside of their chosen field. Some of our crew have a background in camera operations, while others in post-production such as editing and film coloring. While we still had much to learn, we rose to the challenge and shifted our focus from presenting/producing live concert series between the Filene Center and The Barns to a multimedia pre-recorded presentation.

What was the creative process like to bring these to the ‘virtual’ stage?

Once performers are booked, potential locations need to be scouted, and audio and natural lighting considerations vetted. Each filming location should allow the artist or ensemble to give a one-of-a-kind performance in a unique spot that highlights the beauty of the Park. Once that vision is set, the entire crew works together to capture the music, as well as the personal stories from each performer, so that our viewers can connect fully.

What’s an average itinerary for a day that you’re filming a Park Pop-Up?

Logistics and scheduling are the pillars of any successful project. Our team meets once a week to discuss upcoming video shoots and potential artists on the horizon. On the day of the shoot, our schedules tend to vary depending on many factors, mostly the weather and lighting. It’s necessary to have health screenings, production setup, and artists on site before we lose the wonderful rays of light as the sun rises or sets. All in all, our sessions last between two and three hours depending on the type of music and the size of production needed to support.

What’s something that we may not know goes into the process while you’re filming?

The team working behind the scenes on this video series is larger than you’d expect and crosses multiple departments. We have teams working on booking and scheduling, filming, audio production, editing, and promotion. We all work really hard together to make sure we’re putting out the highest-quality and most entertaining videos possible.

Each performance is unique, and it’s important to consider how much the performer(s) will be moving. Too much jumping on a bridge could result in a slight bounce in the footage. Low hanging branches might be in the path of a dancer. But that’s what’s so great about filming in the Park—it keeps you on your toes!

How has the audio recording process happened? How does your setup differ from being indoors?

The recording process for these projects has required a fast turnaround—one or two recordings a week, which includes location scouting with the video team, details on instrumentation and set list from the artist. We go from planning the shoot, to meeting the artists, capturing the audio and video, separate editing, approvals, and release in about 10 days. Also, important—we have to remember bug spray! We are creating a live music “stage” in unique places all over the Park that aren’t designed for performance.

As the lead recording engineer I’m primarily concerned with the recording setup and bringing all of the necessary gear to set the band up wherever we’re going to be at the Park. I’m using a Soundcraft Ui24 to do the recordings, and I have to select different microphones from our inventory depending on the group and location. Because we are filming all over the Park we have to bring everything we need with us—including extension cords to get power where we need it, chairs, folding tables, headphones, everything. In a traditional theater like The Barns or Filene Center, we would have everything we would need—but because we’re roaming, I have to plan for what we might need and think about last-minute things that could come up.

What’s been the biggest surprise to you as you’ve created and worked on the Park Pop-Ups? Biggest learning moment? Biggest accomplishment?

Every day, every session, every song, there is a series of mini accomplishments. Getting the camera angle just right, catching the light at the right moment, zooming in a solo at the right time. All these add up and we all find the joy in each other’s work.

Our biggest accomplishment is being able to shepherd this project from an idea to something that we felt good sharing with the Wolf Trap family in just a few short weeks. We get to show people different places around Wolf Trap that they maybe haven’t discovered yet.

Initially we thought that our approach would be completely different from a “typical” summer, but the more we operate and coordinate, the more we find more similarities than differences.

Wolf Trap’s Park Pop-Ups encompass many genres of music from local artists, and will continue throughout the summer. Watch the streaming Park Pop-Ups on-demand and don’t miss the other Wolf Trap Sessions performances including full-length Opera productions and family-friendly concerts.

Thanks to The Boeing Company for supporting Park Pop-Ups.