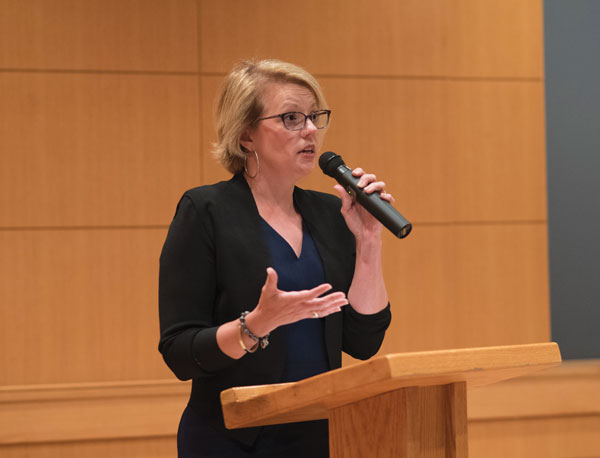 After spending 22 years leading Wolf Trap Opera (WTO), Kim Pensinger Witman retired as Vice President of Opera and Classical Programming in early 2019 and handed over the reins of this unparalleled program to our own Lee Anne Myslewski. In anticipation of this summer, we sat down with Lee Anne to learn about the season planning process and what the future has in store.

Over the years, you and Kim Witman have worked together to plan and cast WTO’s seasons. However, 2019 was a little different with the knowledge of Kim’s impending retirement—how did the Opera team determine this year’s productions?

The casting process is very collaborative. Some of that is simply a result of our process—it’s hard to keep things close to the vest when the team is traveling together for a five-week period! Each year there seemed to be one day when we’d part after auditions with a sense of a path forward, only to reconvene the next morning to learn the team had new ideas for a completely different direction. When that moment happened this year, the difference was transparency all around. Kim said to me, “You only get the answers to the questions that you ask.” And we went back to the drawing board, threw all the previous contenders out, and started from scratch. Some of the original list resurfaced, but some vaporized; the final list was stronger in almost every way, and ultimately made decisions much easier.

Were there any important WTO traditions that you wanted to keep in place this year?

We’ve been reexamining almost every aspect of our operation, questioning why we do what we do, and the manner in which we do it. I can guarantee that our unique artist-centric casting model of finding the best singers and allowing their strengths to dictate our repertoire, will endure. I won’t lie—it’s not an easy task! But the proof is in the pudding: 70% of our recent alumni are still working in the field, and The Metropolitan Opera’s 2018-2019 roster lists 61 of our alumni. While we may add performances, our flagship productions at The Barns and Filene Center will remain the program’s cornerstones and will be cast from our young artists.

As an avid CrossFit fan, are there any lessons you’ve learned that could be applied to the opera world?

The number of parallels I’ve found between the opera world and CrossFit are quite frankly ridiculous—it’s not a coincidence that there’s a healthy community of CrossFitting opera singers out there! When I was singing, maintaining a disciplined, consistent practice routine was paramount. Practice can’t just be in the areas we like, but in the areas in which we struggle: you can’t improve at something that you pretend doesn’t exist (I see you Assault AirBike and Marchesi vocalises).

Showing up every day, not knowing what the workout will entail, but trusting that you’ll be challenged and will grow stronger for having at least tried is a great metaphor for being present regardless of what life, or an opera production, throws at you.