Q & A with the Attacca Quartet 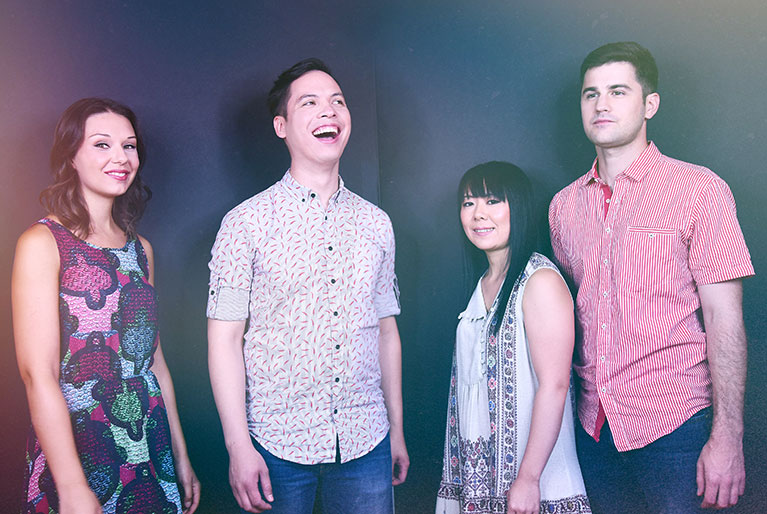 Praised by The Strad as “stunning” and possessing “a musical maturity far beyond its members’ years,” the Attacca Quartet is one of the most dynamic ensembles of its generation. The group – made up of Amy Schroeder, Keiko Tokunaga, Nathan Schram, and Andrew Yee – first formed as Julliard students in 2003. Since then, they have appeared on NPR’s Tiny Desk Concerts, received international acclaim, and played sold-out concerts at Carnegie Hall and Radio City Music Hall. Wolf Trap is thrilled to welcome the Attacca Quartet to The Barns, and prior to their show, we had a chance to catch up with the young quartet to find out what makes them a premier ensemble.

WOLF TRAP (WT): We are very excited to present Attacca Quartet at The Barns this year and welcome you all to Wolf Trap! Is there anything you are looking forward to about making your first Barns appearance?

ATTACCA QUARTET (AQ): As Andrew and Nathan both began playing their instruments in the Northern Virginia public school system, this is an important homecoming for them. Returning to the area where you began studying an instrument (that drastically changes the trajectory of your life) changes your perspective. It’s a combination of nostalgia and obligation to give back to a community that gave us so much. It’s incredibly exciting to be playing in a hall, which we heard about far before we ever imagined performing in.

WT: We know one of your goals with this particular Barns performance was to present a program highlighting folk music. Can you share a little about how and why you chose the pieces you’ll be performing?

AQ: The idea of creating a concert based around folk music is something we have always been inspired by. With this concert, we didn’t want it to be the same idea of folk music that these programs typically bring. While Haydn was certainly a composer of “the people,” his music tends to be associated with class, humor, and quintessential classicism. Yet you’ll find, even in his genre defining Op. 20 No. 4, a sincere homage to the gypsy folk music of his time—a music that generally existed in a very separate realm from Haydn’s own. In this same way, Michael Ippolito looked for inspiration in his writing far outside his own sphere. In “Songlines,” his references and inspiration revolve around the ancient stories of the Aboriginal people of Australia.

And while Beethoven’s immense Op. 132 quartet does not have the same direct correlations to an outside cultural influence, few would doubt there is music more for the people (folk) than the 3rd movement, his religiously revered Heilinger Dankesang  – “Song of Thanksgiving.”

WT: As a quartet, what does the collaboration process typically look like for the four of you? Especially when playing new works or arrangements? Has this evolved from the way you first collaborated together when you formed the Attacca Quartet as Juilliard students in 2003?

AQ: Our process differs from piece to piece—it also really depends on our current workload and how much time we have to spend on each piece. To maximize our time, we generally do a decent amount of individual preparation in advance.  In rehearsals we try to focus on playing as much as possible and to communicate ideas musically rather than verbally. If we need to discuss a piece, we do, and we also do a fair amount of singing to make sure we are phrasing and articulating. Ultimately our goal in rehearsals is to trust each other enough, so that we don’t have to necessarily get to the “final version” before we get on stage, in hopes that this will allow for more spontaneity and creativity in performance.

WT: Who are a few of the composers, mentors, or fellow musicians who have inspired and influenced your work?

AQ: The Juilliard Quartet had a major influence on our development as a young professional quartet. We were mentored by various Julliard Quartet members throughout school and then worked intensively with the entire quartet for two more years when we were the Graduate Resident Quartet at Juilliard. We feel fortunate to have also been mentored by many quartets that we admire, including the Tokyo String Quartet, the Emerson String Quartet, the Guarneri Quartet, members of the St. Lawrence String Quartet, and members of the Brentano Quartet. While we’re a fan of today’s great groups like the Artemis and Arcanto Quartets, we also have a huge crush on the old school string quartet playing like the Busch Quartet. We are currently enjoying spending a lot of time with Beethoven’s masterful String Quartets and are constantly in awe of how he was able to develop the genre into something that is rich and complex, yet subtle. We love artists like Caroline Shaw and Roomful of Teeth, and we are constantly searching for sounds akin to what they so beautifully create. We adore new music and each of us finds inspiration in writing our own pieces from time to time.

WT: If you could only play one piece or song for the rest of your lives, what would it be?

AQ: This is an impossible question to answer, but if we must, Beethoven’s String Quartet Op. 132 is one of our absolute favorite pieces in the whole world. If we continued to play this piece every year for the rest of our lives, we would still find new things to interest, excite, and satisfy us. This piece also includes the famous third movement known as the Heiliger Dankgesang, which was written after Beethoven had recovered from an intestinal illness that he suffered from for an entire winter. It is hard to describe a movement that is so sublime, but when we play it, it almost feels as though we are taken out of this world for moment. We can’t wait to play it at Wolf Trap!

Don’t miss the Attacca Quartet’s performance at The Barns on Sunday, November 5 at 3:00 p.m. For tickets and more information, click here.