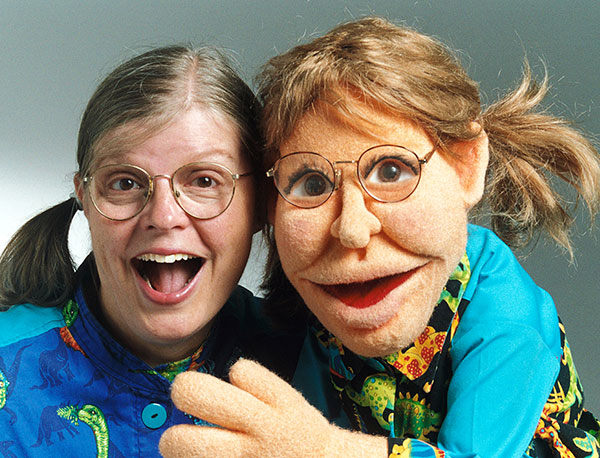 In the decades that Michele Valeri and Ingrid Crepeau have spent working as professional children’s performing artists, they have not only enjoyed tremendous success on their own, but they also witnessed some formative times in Wolf Trap’s history.

In 1981, while Catherine Filene Shouse moved two 18th century barns from New York to Virginia to create The Barns at Wolf Trap—the stunning venue where you’re enjoying this performance tonight—a larger movement was forming around the power of using performing arts to educate our youngest children.

During this time, in addition to producing performances at the Filene Center (and soon The Barns), Mrs. Shouse worked to provide opportunities for disadvantaged individuals to experience and enjoy the performing arts, including those with mental or physical disabilities and the elderly.

Mrs. Shouse hired several professional performing artists, including Michele Valeri, to help cultivate relationships with organizations that served these populations, introduce them to the arts, and accompany them to performances at Wolf Trap.

Valeri recalls one particular evening when Wolf Trap played host to St. Elizabeth’s Hospital where Mrs. Shouse and several leaders from the National Head Start program made a compelling discovery.

The group realized that the same arts experiences they were providing for disadvantaged individuals could also be used to educate preschool and kindergarten children in a variety of subjects including math, science, and literacy.

Prior to this realization, artists like Valeri were taught that, while performing and writing music for young children was a fine profession, using the arts to teach core subjects like math was impossible, much less a best practice.

However, almost serendipitously, it was in the early 1980’s that a large faction of the brain research community pointed to the importance of early childhood development and the use of the arts as an effective teaching tool.

Thus, through the vision of Mrs. Shouse and the leadership of what would become Wolf Trap Teaching Artists—among the first of which was Michele Valeri—Wolf Trap Institute for Early Learning through the Arts was born.

Three years after Valeri began teaching in classrooms as part of Wolf Trap Institute, Ingrid Crepeau joined her as a Wolf Trap Teaching Artist. Together, the two have been involved with the Institute for more than 30 years.

All the while, Crepeau and Valeri were developing a budding business that would soon have a long-standing presence at yet another Wolf Trap program, Children’s Theatre-in-the-Woods. Their act, Dinorock, first began as a children’s album released in 1984, around the same time the two were becoming involved with the Institute. While Valeri enjoyed the album’s success with her co-creator Mike Stein, the addition of Crepeau—a master puppeteer who had been building an extensive reputation in the area—truly brought the album to life on the stage.

Today, Dinorock remains one of the most beloved performances at Children’s Theatre-in-the-Woods, and both Valeri and Crepeau remain active as Master Teaching Artists with Wolf Trap Institute for Early Learning Through the Arts. In addition to Valeri and Crepeau’s love for Wolf Trap, the duo’s driving force is their belief that children thrive in a world where they can enjoy the arts.

“Mr. Rogers always said that play is the serious work of children, and we truly believe that,” said Valeri. “In our opinion, the arts are the key to unlocking creativity in children, and by now I think we can all recognize that we are in real need of some creative minds.”

To learn more about the education programs at Wolf Trap, visit wolftrap.org/education.