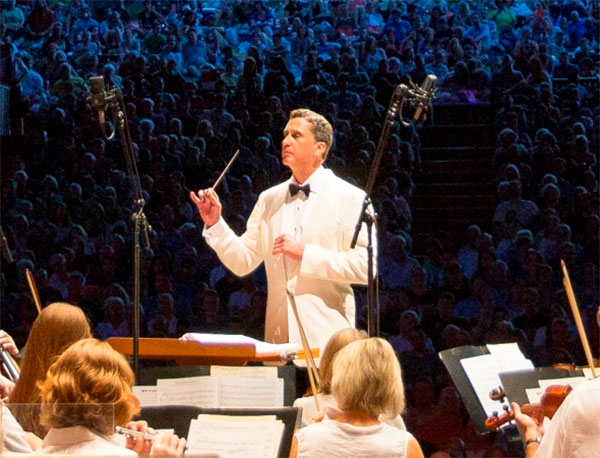 American conductor Emil de Cou has been the principal conductor for the National Symphony Orchestra (NSO) Wolf Trap performances for 14 years—he is an essential part of the Wolf Trap family, an accomplished conductor, and a fan of the music of John Williams.

On August 5, Maestro de Cou will lead the NSO in performing the full musical score to Jurassic Park on the Filene Center stage. We reached out for his thoughts on the music of John Williams and the experience of watching a film performed in concert at Wolf Trap.

John Williams said in an interview: “Jurassic Park…pumps away all the time. You have to match the rhythmic gyrations of the dinosaurs and create these kind of funny ballets.” Do you see similarities between Jurassic Park and a ballet? 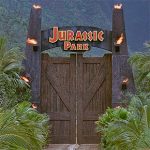 Emil de Cou: I wouldn’t say that I find any similarities between the score and dance music but there is a great deal about conducting movies that is quite similar to conducting for dance.

Timing is everything with recreating film music for a live audience. In the film studio, of course, the score is recorded in very short sequences—sometime one bar at a time, as in the first Harry Potter score. While I have a screen in front of me with all sorts of tools (punches, streamers, time codes) I also use the film, actors’ lines and movements to coordinate the timing of the music.

So in that sense you could say that Jurassic Park is a live action dinosaur ballet—but unlike Swan Lake, a few of the stars do get eaten.

During the famous T-Rex attack scene, the orchestra cuts out completely for a full eight minutes. What do you think of Spielberg’s choice here?

EDC: I was struck at how long that sequence was when I first conducted Jurassic Park with the San Antonio Symphony last year. I think there were several reasons why Spielberg and Williams left that section without any music at all. One being that there is so much sound on screen already from the T-Rex, actors yelling, and the car crashing over the wall that only the loudest music would be heard.

Also, there is nothing more frightening in a suspenseful scene than silence. One of the aspects that makes the original 1931 Dracula so frightening is the nearly total absence of music. Being an early talking picture this was part of the transition between silent films and I think that part of the accidental genius of Dracula was just that – people didn’t know quite what to do with recorded music and film.

Then again some of the most frightening parts of Hitchcock’s The Birds (which has no musical score at all) and the original Alien – to my mind the scariest movie ever made – are played without music.

Is there anything in particular that you hope Wolf Trap audiences notice – perhaps for the first time – when watching Jurassic Park on the big screen this summer? 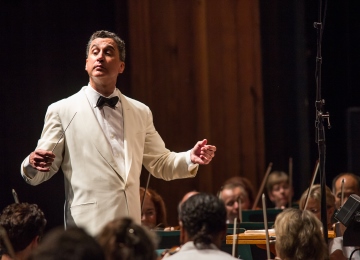 EDC: The NSO performed the world premiere live performance of The Wizard of Oz at Wolf Trap in 2006. In fact, we were the first orchestra to perform the entire score at once, since MGM used several different orchestras and conductors to score the film in 1939.

One thing I was most struck with Oz is that the cyclone scene, which ran about 4 minutes, was composed and orchestrated in the most elaborate manner. Unusual instruments—from a bass flute to a bicycle bell—all compete for attention against a cacophony of wind blowing, Dorothy screaming, witches cackling, and farm animals mooing and clucking their way through the twister. The score was nearly inaudible until 2006.

Likewise, you will be able to experience the most imaginative musical storytelling from the master musical storyteller himself, John Williams, only at our live performance—or I should say, you will experience the music the way John Williams imagined it in his head. You will have the best visual experience (there are two high definition projectors focused behind each screen making the image “pop” even in bright daylight) and the best sound system you could imagine, the National Symphony Orchestra.

Besides, what better place to mingle with a friendly baby raptor than on the lawn at Wolf Trap with a glass of wine?

Experience this imaginative musical storytelling for yourself at Jurassic Park™ – in Concert on Saturday August 5 at 8:30 pm at the Filene Center.

Take the quiz! How well do you know Jurassic Park and dinosaurs?