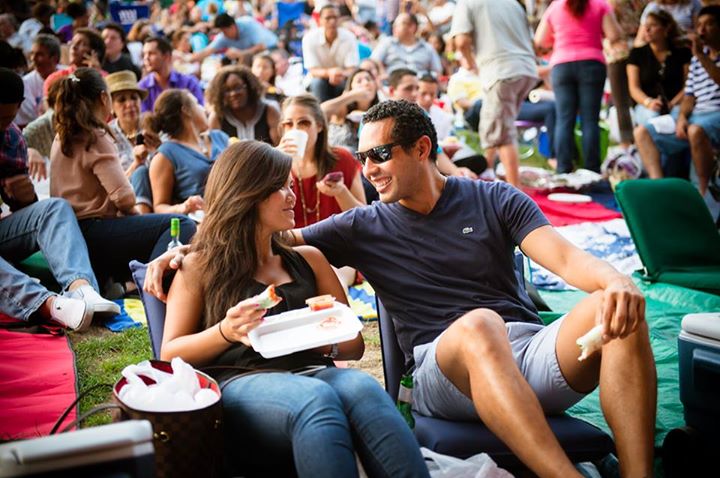 Music isn’t the only thing in the air at Wolf Trap! Quite a large number of members, staff, and patrons have found love here. Below, we’ve compiled some of our favorite stories:

I was flying out from Seattle with my best friend and staying at a relative’s house. He decided that we should be a four-some at Wolf Trap and asked if I’d mind going out with Bill Stewart, a kid he had taught in Sunday school. I got off the phone and said to my mom, “I’m going to fly to Virginia, meet Bill Stewart, fall in love, get married, and move to Virginia.” Well, we went to hear the orchestra on the lawn at Wolf Trap and now we’ve been married for 19 years.

Since marrying, we have sung on stage at Wolf Trap with the Washington Chorus, we attended concerts on the lawn (where I usually fall asleep because I’m so blissfully relaxed), and once while very pregnant, I relaxed on the lawn listening to mezzo-soprano Denyce Graves. Over the years, I have taken the girls to Children’s Theatre-in-the-Woods, to hear Idina Menzel on the lawn, and [a few years ago], the girls and Will surprised me with a great birthday present:  Lord of the Rings on stage. As a choral director, I was thrilled watching the director’s score. Wolf Trap is a part of our lives.

Andy and I met in the lobby of the Center for Education on the first day of our 2008 summer internships at Wolf Trap. Andy calls our first conversation “the most awkward interaction he has ever had.”  I really don’t think it was that bad, but I was obviously nervous.

That year’s intern class gelled as a group, and many of us habitually stayed after work to catch the show at the Filene Center. We would all go out to dinner and then gather at the employee entrance early to nab the best seats on the lawn. Before the shows we played a lot of Connect Four, people-watched, picnicked, and laughed. Among the many shows that we attended were the National Symphony Orchestra with conductor Emil de Cou; Crosby, Stills & Nash; Herbie Hancock; Earth, Wind & Fire; Al Green; and B.B. King.

Andy and I never went on a formal “date” that summer, but we spent time together during work and after work almost every day. I snuck downstairs to his cubicle in the opera department on a daily basis and he made excuses to see me on the weekends.

For the next two years we dated long distance and in 2010 decided to move to Austin, Texas together where Andy enrolled in a Masters of Music program and I went to law school. After three (blissfully warm) years in Austin, we moved back to the East Coast and currently live in Philadelphia. We try to get back to Wolf Trap for a concert every summer where we sit on the lawn, drink a bottle of wine, and reminisce about the early days of our relationship.

I am a volunteer in the gift shop and had been for quite a few years when we opened the newly renovated gift shop in the summer of 2006. The show was Eddie from Ohio and, as usual, my friend Jane and I were in the gift shop watching the patrons milling about and enjoying the evening. A woman came over and bought a t-shirt from us chatting the entire time. We watched her leave, go up to two gentlemen in the middle of the plaza, and proceed to talk with them. They kept glancing in our area so, of course, we kept an eye on them. Within a couple of minutes, one of the gentlemen came over and started talking with both of us. After a few minutes, business picked up and he left so we could work. About 10 minutes later, the gentleman, Bill, came back with an extra ticket and offered it to me. He told me that the woman who had purchased the t-shirt was a friend of his and he was at the concert with her and her husband that evening. I politely told him that I could not go the show because I was volunteering. He then left and the show began. At the end of the evening, we were scrambling with cushions, but he came back and patiently stood there until things had calmed down. He asked me if I would join him at the Lyle Lovett concert the following Tuesday. When I hesitated, he put his phone number on his ticket and gave it to me. I didn’t call.

I was already dating someone which is why I did not call him. In fact, I had received quite a few numbers from guys that summer, so I put his in the pile with the others; I couldn’t get myself to throw them away. I broke up with the guy I’d been seeing after a couple of months and now it was October. I started to think about calling Bill, but wasn’t sure if he would remember me and yes, I thought about calling the other guys too. I admired Bill’s persistence, though, so I decided to give it a shot and I called him—he did remember me and we set up a first date.

We lived 75 miles apart, but he came to Virginia for a dinner date which, as soon as it was over, I told him I was tired and he left to go back his 75 miles to his place. He spent more time on the road than he spent with me that evening. However, even though we both felt the date was a near disaster, we decided to go hiking at Riverbend and were together long term after that. We were married over Christmas in 2008 and had a large reception at The Barns in January 2009. I gave Bill the ticket with his phone number on it as a wedding gift, which I had placed in a shadow box. It is still on display in our home. Wolf Trap continues to play an important part in both of our lives.