Sharing Stories of Learning Through the Arts 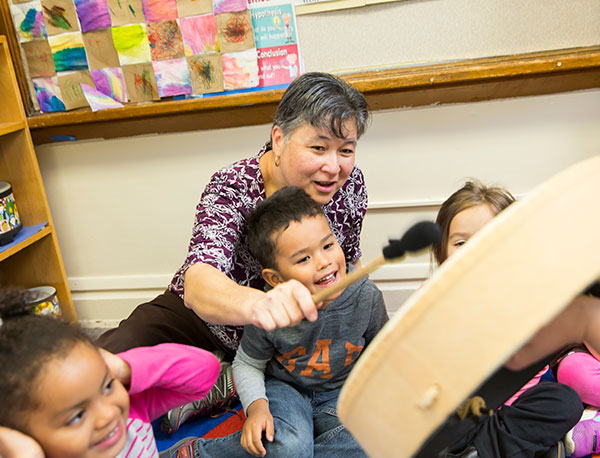 At Wolf Trap Institute for Early Learning Through the Arts, we hear every day about the ways our Teaching Artists are making a difference in the lives of the children and teachers they serve. We’ve heard countless stories – like using the classic tale The Three Little Pigs to help children acquire and practice language skills and learn engineering concepts by playing the parts of straw, stick, and brick building materials; or using the arts to engage an autistic child who had previously had difficulty recognizing sounds and visuals as having meaning. We often say we have enough stories to fill a book.

Now, one Wolf Trap Institute affiliate that has done just that: In the just-published Empowering Early Learners, Their Teachers, and Families Through the Performing Arts., Teaching Artists from Living Arts/Detroit Wolf Trap share powerful, inspirational and often surprising stories about how arts-integrated practices are positively impacting students, teachers and parents in their community.

The following is an excerpt written by Karilú Alarcón Forshee, a Mexican-born Wolf Trap Teaching Artist who has been with Living Arts since 2011. Congratulations to our partners at Living Arts for this accomplishment!

Since I was very little, I’ve understood how important it is for families to share experiences in the arts.

My father is a doctor, but he’s also a guitarist—and music is his passion. I started taking arts classes when I was 8, appeared in my first show at age 11—Joseph and the Amazing Technicolor Dreamcoat—and I never stopped. I’ve been in at least one show each year ever since. I attended a school for the arts in Juarez when I was young. Then I studied further at the university level. When I was young, I was in shows like Annie. When I was older, it was more like Rent. The performing arts gave me a sense of confidence that nothing else could give me—and now I want to share that with children.

There are so many life lessons we can learn through theater arts. You learn that, even if your part is a little one on stage, without you the whole project won’t work. Everybody needs everyone else in a theater company. That’s a unique lesson you learn through theater: Everyone is important. In the theater, you become a community—and that’s a great thing for a child to learn.

Theater arts also are good for health. When I was a child, I wasn’t always healthy. I didn’t eat well and was overweight. That’s a common problem for children today: Parents work; kids get home and open the fridge; they watch TV. When I got involved in theater, I was way more active than I’d ever been before. I was practicing dance and was feeling so much better.

And that’s not all. In theater, lines are memorized. That discipline has to help with homework for school.

I would describe our new bilingual Family Involvement series as classes that are similar to what we do with children during a residency—but, in this setting, we actively involve the family in the class. I completed an eight-week series in the summer of 2016 with Alesha Nicole, and we usually had full classes. We had enrolled eight kids and an adult family member, and occasionally, someone would bring along a sibling. Most of the time we had a good sized group. This was new for us at Detroit Wolf Trap and Living Arts. It was the first time we had enrolled parents as we do children.

The whole experience was surprising. As I stepped into the first class, I could see the question in the parents’ faces: What’s this all about? I realized they were assuming that they would be observers as we invited their children to play. Little did they know! These parents soon were the main characters in our journey together.

My first impression of the preschoolers entering the room was of immense pride. Through their words and actions, they were saying: Hey, look at me! I am here—and so is Mom! They were excited to wander around the room.

I invited everyone to sing our “Hello” song—first in English and then in Spanish. The moment I started the Spanish version, a shy mother in the corner began to relax. Her face was glowing.

She knew that her inability to speak English wouldn’t be a barrier here. What a powerful setting for a class. Everyone felt confident.

It’s time to learn a song about today’s story, Bear and Bee. It’s time for caregivers to model what we are doing with our bodies and voices.

I have two friends,

Now we use our bodies to become big as a bear—and then as small as a bee. Time to speak in a low-pitched bear voice—then in a high-pitched bee voice. By the time we finish the song, each family has become a two-character team in this imaginary world.

It’s actually learning. Our participants are using many tools without even thinking about what’s happening: English and Spanish, and the establishment of a steady beat through bodyand voice, just to name a few. This story about the bear and the bee is about fear and friendship. Through our activities, we call on another skill—using feelings to understand the two roles. As the story unfolds, we travel with these characters from feeling scared to overcoming those fears and making new friends.

Then, we bring the story to life! We perform roles on a pretend stage. The parents and caregivers get to play bears; children play bees. Or we can switch it up, and play the opposite roles. It’s a powerful experience as adults and children interact this way.

I can see that some parents have a bit of stage fright, but they overcome it to help their children. We cheer each other on along the way.

The end of the little play is the beginning of the best part of our session: Reflection. This time is the most reassuring moment for our children. First, Parents—not me—ask their children about what happened in the story everyone just created, working on recall and memory skills and surprises about their own child’s interests. The second thing the adults do is make observations about their children’s growth in the arts. I can hear parents praise children for all sorts of things: “You were so loud when you sang!” “You became such a big bear!” Children smile. Their pride becomes the main tool for growth in the next few days as they eagerly anticipate coming back for a brand-new story. And they do come back, all together, children and adults learning through drama and music.

“All grown-ups were once children … but only few of them remember it.” —Antoine de Saint-Exupéry, The Little Prince.

I have always loved the story of The Little Prince. This quote is saying exactly why we as adults all need to find time to play, imagine and remember. In this work that we do, I strongly believe that our world is full of possibilities and that we are here to be effective creators. We need to use the arts as a motor of constant creativity to better ourselves and the spaces we live in.

About the author: Karilú Alarcón Forshee was born in Mexico. She graduated from the University of Texas in 2009, with a degree in theater arts and English-Spanish translation. She moved to Detroit in 2011. In addition to her work with Living Arts, Karilú has worked with children and teenagers in many artistic programs including, Matrix Theatre and the Mosaic Youth Theatre of Detroit.