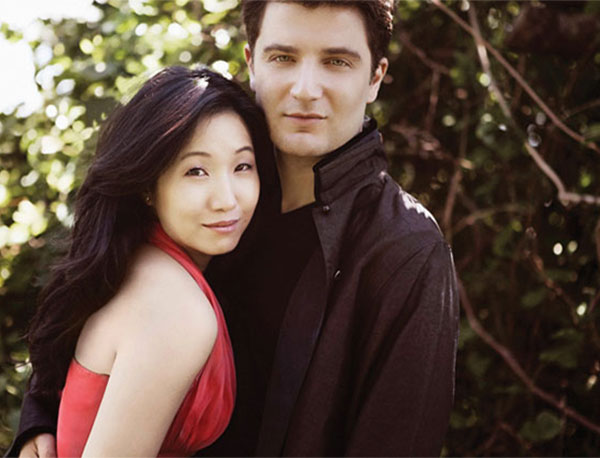 On stage and off, Alessio Bax and Lucille Chung share everything—their music, their home, their marriage, their life. They are among the foremost practitioners of piano four hands, where two people share the same 88 keys. After the holiday break, Chamber Music at The Barns resumes with their January 8 performance of works by Mozart, Mendelssohn, Stravinsky, and Piazzolla. They were happy to answer a few questions about making music with the one person who knows you best.

1. Piano four hands seems like a very (little-“r”) romantic format, capable of both great passion and profound intimacy. How did you decide on it for your Wolf Trap concert, as opposed to performing as a two-instrument piano duo?

LC/AB: Lately, we have been performing more one-piano/four-hands repertoire. You are absolutely correct in stating that this format is the most intimate form of chamber music! What other combination allows two performers to share the same instrument? There has to be complete trust, because one person has control of the pedal and physically we have to maneuver the restricted space in a “democratic” way. Also the repertoire for one-piano/four-hands tends to be quite special. It’s mostly music written by the composers for themselves and their close friends to play and enjoy. It has a very honest, direct, and incredibly personal voice.

2. What kind of repertoire lends itself best to an arrangement for four hands?

LC/AB: There is a wealth of music originally written for piano four hands. Composers such as Schubert and Mendelssohn would write heavenly music to perform with friends for pure enjoyment. And when one could not fit a full orchestra in a home, many composers, such as Liszt, would arrange complete symphonies so they could be heard in a salon setting. The big orchestral scores are often better suited to a two-piano transcription, but there are many exceptions. Stravinsky’s Petrouchka, which we’ll be playing at Wolf Trap, needs such incredible synchronization of rhythms, pauses, and breaths that you need to be right there next to your partner while performing, even though it can be a logistical nightmare!

3. You live in an apartment in New York that has two pianos. Are they “his and hers,” each adjusted and voiced to your separate preferences, or do you switch instruments back and forth?

LC: They are actually both mine! Ha. Alessio’s piano is still in Italy. And yes, we switch back and forth depending on the repertoire.

4. In 2014, you welcomed your first child, Mila, into your family, and in January 2016, Alessio released a solo album, Lullabies for Mila. How did you choose the music for it? Did you test out various selections to see which were best at putting your daughter to sleep?

AB: It is intended to be more than music to put someone to sleep! I have picked some of my favorite works, yes, mostly filled with a calm atmosphere, and tried to create a journey through time and through harmonies that would make sense programmatically, musically, and emotionally. I am happy to have been able to create a disc that can be enjoyed by little ones and their parents from beginning to end, as a seamless stream.

5. Does maintaining separate solo careers in addition to your work as a duo make family life easier, so you both aren’t always on tour and away from home at the same time? Does it allow you to accomplish more artistically?

LC/AB: Solo performances are more of a priority and as you pointed out, they tend to be at different times so we can coordinate our schedules accordingly. Our sense of time [since we became parents] has changed dramatically. When preparing for concerts, we feel much more effective and focused and this gives us a greater sense of freedom in our playing.

We usually bring Mila with us everywhere: She’s been to 16 countries and 17 states. It is definitely easier to travel all together. We don’t feel guilty leaving her, and we get to see the world through her eyes. And when concert time comes, we feel totally involved in the music and fulfilled at the same time.

Don’t miss Alessio Bax and Lucille Chung at The Barns at Wolf Trap on Sunday, Jan 8 at 3 pm.